As we settled into bed on the Sunday night after the January 21 Global Women’s March, my husband read a post that had been shared on a family member’s Facebook page. The gist of the post was that several million women, men, and children who marched did not speak for the post’s original author, Brandi Atkinson, about whom I’ve been able to find little information.

Now, I come from a large family containing every brand of spiritual beliefs, gender preference, and political persuasion. We’re spread around the country, but manage to get together fairly regularly and, by avoiding intensely political conversations, we are generally affable and fond of one another. Yet after my husband and I turned out the lights that night, I laid awake for hours, my thoughts racing. Should I:
A. comment on the piece (which my relative had shared, not authored),
B. block this beloved relative’s future posts (which not only feels passive aggressive but runs counter to my belief in the necessity of healing our country’s dangerous red-blue rift through open respectful dialogue),
C. try to figure out why the post bothered me so much, or
D. explore the genuine feelings of someone who views our nation and our place in the world differently from me, with the aim of finding respectful dialogue. 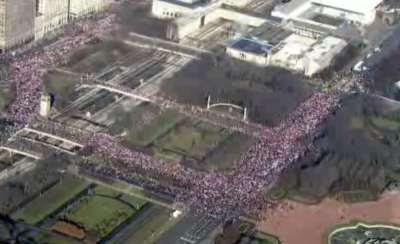 As Chicago’s crowd grew, it became apparent that actual marching was impossible. Far from being cancelled, the rallies and speeches occurred throughout every block full of marchers. Credit: CBS News Chicago